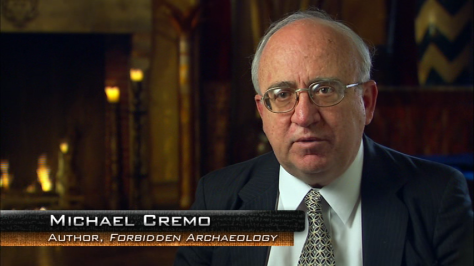 Michael Cremo is on the cutting edge of science and culture issues. In the course of a few month’s time he might be found on pilgrimage to sacred sites in India, appearing on a national television show, lecturing at a mainstream science conference, or speaking to an alternative science gathering. As he crosses disciplinary and cultural boundaries, he presents to his various audiences a compelling case for negotiating a new consensus on the nature of reality.

Michael Cremo is a member of the World Archeological Congress and the European Association of Archaeologists as well as an associate member of the Bhaktivedanta Institute specializing in history and philosophy of science.

The soul that I am entered its present body at the moment I was conceived in the fall of 1947. I appeared from my mother’s womb on July 15, 1948, in Schenectady, New York. That birth was probably one of millions I have experienced since I left my real home in the spiritual world. My mother tells me that when I was an infant, she would give me alphabet soup, and sometimes I would not eat it, but would just spell out words in the bowl. From that, I take it that I must have practiced writing in many previous existences. In this life, I recall always having wanted to be a writer.

“From the very beginning, my life has been a spiritual quest for love and truth. My father served as an American Intelligence Officer for the United States Air Force, and from that time my life was one of periodic change and travel. I went to high school at an American school in Germany and spent my vacations traveling all over Europe. Once, in the spring of 1965, in a youth hostel in Stockholm, I met some kids who had been to India and back, traveling overland. I decided I would someday do the same thing. I also became deeply interested in Eastern philosophy, particularly Indian esoteric teachings. I kept travel diaries, wrote poetry, and tried my hand at autobiographical short fiction.

“During my last year of high school in St. Petersburg, Florida, I took a creative writing course. The next year I entered George Washington University. Over the next two years, I became immersed in the counterculture and gradually gave up my plans to enter government service. I continued my investigations into Eastern philosophy and esoteric spiritual teachings.

“In 1968 I left college and went to Europe on a voyage of self-discovery. I took a boat from Haifa to Istanbul, where the pull toward the East was so strong that I found myself heading overland to India. I got as far as Tehran, lost my nerve, and turned back.

“After carefully studying the Bhagavad-gita, a gift of some Hare Krishna people at a Grateful Dead concert, I decided that I should absorb myself in the yoga of devotion to the mysterious Lord Krishna. Later I moved to Los Angeles to join the staff of the International Society for Krishna Consciousness, and to write for the Bhaktivedanta Book Trust (BBT). By 1980 I was regarded as an accomplished writer. To date, the books written and edited by myself and other BBT staff have sold more than ten million copies and have been translated into many languages.

“With Dr. Richard L. Thompson, a founding member of the Bhaktivedanta Institute, I began a series of books aimed at both scholarly and popular audiences. The first to be published was Forbidden Archeology: The Hidden History of the Human Race. This book shows that archaeologists and anthropologists, over the past one hundred and fifty years, have accumulated vast amounts of evidence showing that humans like ourselves have existed on this planet for tens of millions of years. We show how this evidence has been suppressed, ignored, and forgotten because it contradicts generally-held ideas about human evolution.” “In lecture presentations on Forbidden Archeology to scientific and lay audiences around the world I see a new consciousness emerging that integrates science and religion into a cohesive paradigm of reality.” [1]

Forbidden Archaeology: The Hidden History of the Human Race

Over the centuries, researchers have found bones and artifacts proving that humans like us have existed for millions of years. Mainstream science, however, has suppressed these facts. Prejudices based on current scientific theory act as a knowledge filter, giving us a picture of prehistory that is largely incorrect.

Divine Nature: A Spiritual Perspective on the Environmental Crisis

Michael Cremo and Mukunda Goswami outline a challenging new vision of humankind and the natural world, revealing how a spiritual approach can save humanity from the environmental catastrophe we have been heading towards. They contend that real solutions to our current environmental problems will be implemented only through a shift in human consciousness and an awakening to the spiritual dimension of this crisis. The authors touch on a wide range of topics, including the earth’s threatened wildlife, shrinking rainforests, eroding soil, proliferation of trash, and toxic waste disposal. The negative environmental impact of meat consumption is also uncovered–deforestation, agricultural inefficiency, and air and water pollution. Its in-depth exploration of history, scientific theory, and the metaphysics of karma offers concerned earth-watchers a spiritual blueprint for creating a better world.

Forbidden Archeology’s Impact offers readers an inside look at how mainstream science reacts with ridicule, threats and intimidation to any challenge to its deeply held beliefs.

“Hidden History is a detective novel as much as a scholarly tour de force. But the murder is not the butler. Neither is the victim a rich old man with many heirs. The victim is man himself, and the role of the assassin is played by numerous scientists.” Dr. Michael Rothstein, Politiken Newspaper, Denmark

An international authority on archaeological anomalies and a research associate at the Bhaktivendanta Institute, specializing in the history and philosophy of science. His books have been translated into 13 languages.

The Forbidden Archeologist: The Atlantis Rising Columns of Michael A. Cremo

Michael Cremo, an international authority on human antiquity, has justly earned the “forbidden archeologist” title. For over twenty-seven years he’s been digging up documented, credible findings that mainstream archeologists don’t want you to know about—discoveries in the fossil record that tell a completely different story from Darwinian evolution. His latest book, The Forbidden Archeologist, presents his research at international scientific conferences, comments on the latest discoveries and “missing links,” examines famous archeological sites such as the Sterkfontein Caves—the alleged cradle of humanity—and responds to mixed reactions to his books, now translated into twenty-six languages. This collection of forty-nine articles published in Atlantis Rising magazine is like the Cliff Notes on his best-selling, encyclopedic Forbidden Archeology and formidable Human Devolution. Readers will quickly understand the strongest arguments and remarkable discoveries that reveal evolution as a failing theory.