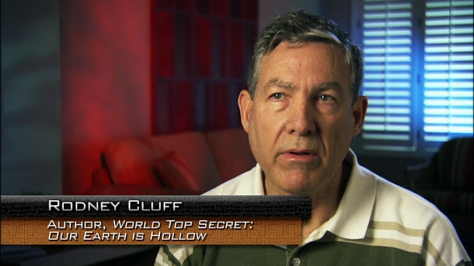 RODNEY M. CLUFF, author of World Top Secret: Our Earth IS Hollow! was born and raised in the American colony of Colonia Juarez in northern Mexico. He became interested in the Hollow Earth Theory at the age of 16 while working on a New Mexico farm where the farm manager told the workers of the theory. He thought, What an ideal place for the Lord to hide the Lost Tribes of Israel!

After graduating from high school, Mr. Cluff served a full-time mission for the Church of Jesus Christ of Latter-day Saints in Mexico where he met his wife. One year after his release, they were married in the Mesa Arizona Temple and now have five lovely children, fifteen lovelier grandchildren, and two even lovelier great-grandchildren!

They moved to Phoenix, Arizona, where one day Mr. Cluff noticed an advertisement of Raymond Bernard’s book, The Hollow Earth in a tabloid newspaper. He sent for it and thereby began many years of study and writing which has led to the present work. After 16 years with the Arizona Department of Health Services working as an Information Technology Specialist, Mr. Cluff retired and now lives with his wife Keta in the retirement community of Sun City, Arizona, and continues his research into evidences for hollow planets as a hobby.

He firmly believes: OUR EARTH IS HOLLOW!  Backed with scientific evidence, including satellite photos of the polar holes, analysis of the observations of polar explorers, analysis of earthquake data and much more — coupled with evidence from the scriptures and history that the Lost Tribes of Israel are now FOUND within the Hollow of Our Earth, he presents his argument in favor of the Hollow Earth Theory.

It is his hope that someday, he may have the privilege of visiting his cousins of the Ten Tribes in the North Countries of the Hollow Earth! The author’s own ancestry is of Israelitish origin, of the Tribe of Ephraim, and can be traced back to the Exile of the Ten Tribes from Palestine when they were carried captive into Assyria in 721 B.C.

The Ten Tribes were held captive for over a century by the Assyrians, but then escaped over the Caucasus mountains sometime before Babylon conquered Assyria in 605 B.C. They made their home in the region of the Crimea and the Steppe of Russia just north of the Black Sea up until the first century B.C. While there, they were ruled by an illustrious leader named Odin. The Roman armies threatened to conquer the region so his ancestors, because of their fierce love of freedom and independence, determined to migrate. From their custom of burying their dead in burial mounds, their migrations have been traced from the Black Sea up the valley of the river Dnieper in Russia to the Baltic Sea and from thence to northern Germany and Scandinavia.

One branch of these people became known as the Sakae or Saxons and settled in Northern Germany. Shortly after the Romans left the British Isles in the fourth century A.D., certain Celtic tribes of the British Isles invited the Engles, Saxons, and Jutes (who had previously raided the east coast of England as pirates) to bring their bands over and help defeat other Celts. From the eighth to the eleventh century they were known as the Scandinavian Vikings. They became the most volatile seapower and military force in Europe. They often attacked coastal areas with fleets that ran into the hundreds of ships and highly organized armies of several thousand. The French became weary of being looted each harvest season and so they invited the Vikings to accept a large section of France and raise their own crops. The Norsemen agreed and the territory became known as Normandy, or loved of the Norsemen.

The Author’s Clough-Cluff forefathers were of the Vikings who settled Normandy in France. They came to England with William The Conqueror in 1066 A.D. In the distribution of lands among his officers, a large estate fell to one CLOUGH in Yorkshire. This estate has been transmitted from father to son until the present time and is known as the Esquire Clough Estate, and is situated about 26 miles from the old city of York.

In the year 1635, fifteen years after the first Pilgrims immigrated to America, at about the age of 19 to 21, John Clough with his brother sailed from London, England on the Clipper ship The Elizabeth. Upon arriving in America, John Clough settled in Massachusetts. One of his descendants, David Cluff, changed the spelling of his last name when he joined The Church of Jesus Christ of Latter-Day Saints (commonly known as the Mormons) in 1830. Therefore, all Cluff’s in the world, to this author’s knowledge, are descendants of this David Cluff, whose ancestry can be traced back through the Saxons and Vikings to the House of Israel.

In 2003, Rodney was contacted by Steve Currey of the Expedition Company of Provo, Utah who asked him to help plan an expedition to Our Hollow Earth.  They put together the Voyage to Our Hollow Earth Expedition with plans to take an airliner into the Arctic to pin-point the location of the North Polar Opening, and then follow that with a sea expedition chartering the Russian Nuclear Icebreaker, the Yamal.

Unfortunately, in 2006, three months before the departure date of the over flight of the Arctic, Steve discovered he had 6 inoperable brain tumors, and died two months later.  His family cancelled their involvement in the expedition and returned all expedition members’ monies.

World Top Secret: Our Earth IS Hollow!: The Scientific, Scriptural and Historical Evidence that Our Earth Is Hollow

World Top Secret: Our Earth IS Hollow! is the volume you have been waiting for! At last, here stands revealed the secrets of that beautiful land beyond the poles discovered by United States Admiral Richard Evelyn Byrd. The Contents page of World Top Secret: Our Earth IS Hollow! reads like an advertisement of LOST and FOUND!: The Garden of Eden — FOUND! The Land of the Lost Ten Tribes — FOUND! The Origin of Flying Saucers — FOUND! The Throne of David — FOUND! Paradise — FOUND! The City of Enoch — FOUND! The Celestial Destiny of Our Hollow Earth, the scientific evidence including, The Auroras, Van Allen Radiation Belts and Earthquakes Prove Our Earth Is Hollow! — plus 5 more revealing chapters which prove and establish with evidence upon evidence that Our Earth is INDEED Hollow and inhabited within by a race of SUPER GIANTS. They consider themselves the GUARDIANS of planet earth for the CREATOR and have been actively working to prevent us from blowing up the planet with nuclear weapons! Included also, are detailed instructions on how you can get there, also explained are the reasons why the discovery that our earth IS hollow has been kept hidden from the world and why now we MUST know about them. Upon this knowledge rests the freedom of the world! The REAL enemy is within our borders NOW!