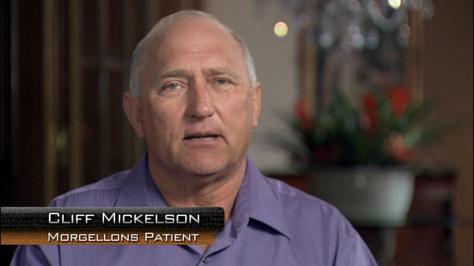 What is Morgellons disease?

Morgellons disease (MD) is a rare disorder characterized by the presence of fibers underneath, embedded in, and erupting from unbroken skin or slow-healing sores. Some people with the condition also experience a sensation of crawling, biting, and stinging on and in their skin.

These symptoms can be very painful. They may interfere with your daily activities and the quality of your life. The condition is rare, poorly understood, and somewhat controversial.

The uncertainty surrounding the disorder makes some people feel confused and unsure of themselves and their doctor. This confusion and lack of confidence can lead to stress and anxiety.

Who gets Morgellons disease?

More than 14,000 families are affected by MD according to the Morgellons Research Foundation. In a 2012 study by the Centers for Disease Control and Prevention (CDC) that included 3.2 million participants, the prevalence of MD was 3.65 cases per 100,000 participants.

Another study showed that people are at a higher risk for MD if they:

Most research since 2013 suggests MD is spread by a tick, so it is unlikely to be contagious. People who don’t have MD and live with family members that do rarely get symptoms themselves.

The fibers and skin that are shed may cause skin irritation to others, but can’t infect them.

What are the symptoms of Morgellons disease?

The most common symptoms of MD are the presence of small white, red, blue, or black fibers under, on, or erupting from sores or unbroken skin and the sensation that something is crawling on or under your skin. You may also feel like you’re being stung or bitten.

Other symptoms of MD are similar to those of Lyme disease, and may include:

Why is Morgellons a controversial condition?

MD is controversial because it is poorly understood, its cause is uncertain, and research on the condition has been limited. In addition, it’s not classified as a true disease. For these reasons, MD is often considered a psychiatric illness. Although recent studies seem to show MD is a true disease, many doctors still think it is a mental health issue that should be treated with antipsychotic medication.

The condition’s history has also contributed to the controversy. Painful eruptions of coarse hairs on the backs of children was first described in the 17th century, and called “morgellons.” In 1938, the skin-crawling feeling was named delusional parasitosis, meaning the false belief that your skin is infested with bugs.

The erupting skin fiber condition reemerged in 2002. This time, it was associated with the sensation of crawling skin. Because of the similarities to the earlier emergence, it was called Morgellons disease. But, because it occurred with the skin crawling sensation and the cause was unknown, many doctors and researchers called it delusional parasitosis.

Probably due to self-diagnosis after searching the internet, the number of cases increased significantly in 2006, especially in California. This initiated a large CDC study. The results of the study were released in 2012 and showed that no underlying cause, including infection or bug infestation, was found. This reinforced the belief in some doctors that MD was actually delusional parasitosis.

Since 2013, research from microbiologist Marianne J. Middelveen and colleagues suggests an association between MD and the tick-borne bacteria, Borrelia burgdorferi. If such an association exists, this would support the theory that MD is an infectious disease. [1]