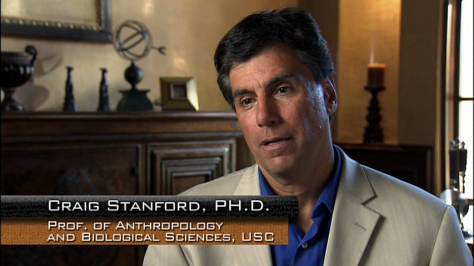 Craig Stanford is a primatologist and biological anthropologist. He took his Ph.D. from the University of California, Berkeley and is currently Professor of Biological Sciences and Anthropology at the University of Southern California, where he also serves as co-Director of the U.S.C. Jane Goodall Research Center. He has carried out field studies of chimpanzee hunting behavior in Tanzania in collaboration with Dr. Jane Goodall, of chimpanzees and mountain gorillas in Uganda, and of langur monkeys in South Asia. In addition, he has been involved for the past several years in field research and conservation efforts on endangered tortoises. His work has been funded by numerous organizations including the National Science Foundation, the National Geographic Society, the Wenner Gren Foundation for Anthropological Research, and the L.S.B. Leakey Foundation.

Stanford has published sixteen books and more than one hundred scholarly and popular articles. His articles about animal behavior and human origins have appeared in Natural History, American Scientist and other popular nature and science magazines. His books have covered topics ranging from the evolutionary roots of humanity to the behavior of primates, to conservation of endangered primates and other animals. He is also the lead author on a series of widely used textbooks in biological anthropology.

An acclaimed teacher who has won every major teaching award at the University of Southern California, Stanford lectures around the United States and elsewhere on topics related to his work on human origins and primate behavior. [1]