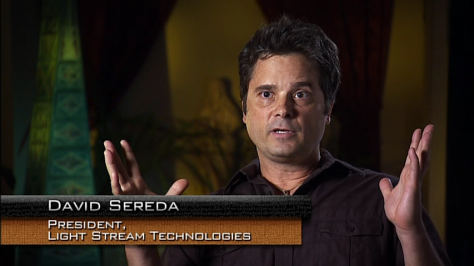 David Sereda was born in Edmonton, Alberta, August 21, 1961. He was born into a family of 5 boys being the 2nd eldest. His father, Dr. Lynn Sereda, Ph.D. in educational psychology from UC Berkeley, CA, was dedicated to his children’s spiritual growth. His in uence on David is one of the greatest driving forces behind what he does. His mother Linda Trafford, was a carpenter, artist and family lawyer in California.

Crystal Sereda first met David Sereda in Los Angeles at the House of Blues. Dan Aykroyd introduced us at a world meeting of sorts, wherein, my husband was introduced to me as a UFO researcher and historian. David, among other experts and friends were brought in to analyze some UFO footage in the screening room. At that time I especially enjoyed singing Jazz and blues in Los Angeles. I was professionally trained in opera technique, which I use with my husband’s music to create a new way of recording with the 5151, being the rst to ever be recorded in modern history out of our “Scale of Life” new harmonic musical scale.

We have also enjoyed lm making together which includes our, narrating, acting, lming, and my singing vocals for our documentary lms along side my husband’s love for music with scoring. We have produced such documentaries as Quantum Communication, The Voice, From Here to Andromeda, Hope For Human- ity and Mona Lisa’s Little Secret.

Since the year 1999, David has appeared on hundreds of radio shows such as Coast to Coast AM with Art Bell and George Noory, Jimmy Church, John B. Wells, Shirley MacLaine, Alan Handelman, Alan Eisenberg, and so many more. He has also appeared on nearly every news station on TV including CNN, Anderson Cooper, Fox News (various af liates), History Channel “Ancient Aliens”, Peter Jennings UFO special, “Seeing is Believing 2005” and more.

He has written self published books such as Evidence, the case for NASA UFOs, Singularity, Differentials, Face to Face with Jesus Christ, and jointly with his wife Mona Lisa’s Little Secret, and God’s Great Pyramid.

He has produced and scored music for meditation, frequencies for tuning consciousness. He and his wife have a meditation practice and consciousness course series on audio and video called Quantum ReGenesis. David and Crystal Sereda have developed a company with natural technology developed both to im-print frequencies and vibrations into jewelry & crystals. He also designs and makes har- monic eld transmitters and wands!

David Sereda a.k.a. “The Modern Day DaVinci”, is one of the most innovative spiritual technology inventors and thought-leaders of our time.

David is one of the extremely rare keynote speakers that has extraordinary spiritual enlightenment as well as the advanced scientific and technological know-how.

He is a renowned author, spiritual genius, and free-thinking space and quantum scientist, who has worked with world class physicists, (spoke in Congress on nuclear fusion in 1993), who reaches millions of people on radio and TV shows. He was also an ecologist (having personally planted 1.3 million trees in over 22 years.

He is a film producer/Director of several documentaries including “Dan Aykroyd, Unplugged on UFOs”. He has appeared on Fox, TLC, History Channel, ABC, CNN Anderson Cooper, Coast to Coast AM with Art Bell and George Noory and dozens of other radio shows world wide.

In the 90’s, Sereda conducted a deep scientific investigation into the scientific community at NASA and outside of the agency into 1990s space shuttle mission video footage of UFO Phenomena. The results of that investigation led to ground-breaking disclosure in the book and documentary film, “Evidence, The Case For NASA UFOs.”

With over 35 years of daily meditation practice, his goals are consciousness development and has created the world’s only quantum harmonic system for DNA upgrade and light body activation.

Stones have a great hidden purpose in nature. They possess a great untapped power. They have memory!

Stones hold vibrations and they can transmit vibrations!

“And if thou wilt make me an altar of stone, thou shalt not build it of hewn stone, for if thou lift up thy too upon it, thou hast polluted it.”

With advanced Quantum Energy technology at Light Stream™ Technologies, David Sereda has found a way to condense this process. Using a series of 5 quantum energy generators, we can now place religious or natural harmonic vibrations into stone, crystal or natural materials.

All of the ancient religions of the world spoke about the healing powers of stones. These were not ordinary stones, but stones that stored spiritual vibrations.

At the University of California at Stanford, in 1994, scientists discovered a way to put a movie of the Mona Lisa and a humming bird in a crystal and then retrieve it. They discovered that crystals may become the hard drives of the future.

At Light Stream™ Technologies, using quantum technology, we are able to put a zero-point energy conduit, healing or spiritual prayer vibrations in our jewelry. This jewelry caries a vibration that can scientifically be measured by anyone who touches it.

Light Stream Quantum Vibrational Jewelry is Energized and Treated with the elds of the Quantum Universe’s Energy.

This is scientifically tested. [1]