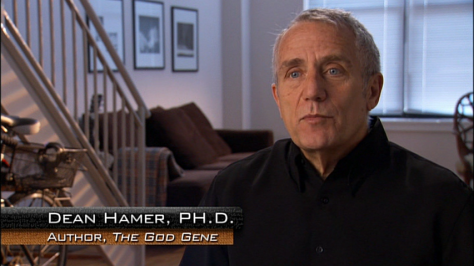 Dean Hamer (born 1951) is an American geneticist, author, and filmmaker. He is known for his research on the role of genetics in sexual orientation and human behavior, contributions to biotechnology and HIV/AIDS prevention, and popular books and documentaries on a wide range of topics.

Education and career
Born in Montclair, New Jersey, Hamer obtained his BA at Trinity College, CT, and his PhD from Harvard Medical School. He was an independent researcher at the National Institutes of Health for 35 years, where he was the Chief of Gene Structure and Regulation Section at the U.S. National Cancer Institute; upon retirement in 2011 he was designated Scientist Emeritus. Hamer has won numerous awards including the Maryland Distinguished Young Scientist Award, the Ariens Kappers Award for Neurobiology, an Emmy Award, and New York Times author of the year.

Biotechnology research
Hamer invented the first method for introducing new genes into animal cells using SV40 vectors. while a graduate student at Harvard Medical School. This approach was used to produce a variety of biomedical products including human growth hormone and a vaccine for Hepatitis B, resulting in 4 US patents.

At NIH, Hamerʻs lab initially focused on the metallothionein gene system. They elucidated the mechanism of induction of yeast metallothionein by copper ions, one of the first eukaryotic gene regulatory systems to be understood at the molecular level and a useful method for regulating therapeutic protein production.

Human sexual orientation and behavior genetics
In the 1990s Hamer began studies on the genetics of human behavior, which led to the first molecular evidence for genes that influence human sexual orientation. His research group’s first paper, published in Science in 1993, reported that the maternal but not paternal male relatives of gay men had increased rates of same-sex orientation, suggesting the possibility of sex-linked transmission in a portion of the population. A genetic linkage analysis of DNA samples from these families showed that gay brothers had an increased probability of sharing polymorphic markers on the subtelomeric region of the long arm of the X chromosome, Xq28, providing statistically significant evidence for linkage to the sexual orientation phenotype. This finding was replicated in two other studies in the United States whereas a study in Canada found contrary results; meta-analysis of all data available at that time suggested that Xq28 has a significant but not exclusive effect. Subsequently, a genomewide scan by Hamerʻs group revealed additional regions on autosomes that were moderately linked to male sexual orientation.

Hamer’s results were robustly replicated in 2012 in a large, comprehensive multi-center genetic linkage study of male sexual orientation conducted by several independent groups of researchers. The study population included 409 independent pairs of gay brothers, who were analyzed with over 300,000 single-nucleotide polymorphism markers, and confirmed the Xq28 linkage by two-point and multipoint (MERLIN) LOD score mapping. Significant linkage was also detected in the pericentromeric region of chromosome 8, overlapping with one of the regions detected in the Hamer labʻs previous genomewide study. The authors concluded that “our findings, taken in context with previous work, suggest that genetic variation in each of these regions contributes to development of the important psychological trait of male sexual orientation.”

Hamer and colleagues also investigated the genetic roots of anxiety and found that a promoter region polymorphism in the gene for the serotonin transporter, which is the target of antidepressant drugs such as Prozac, is associated with mood and personality. This finding has been extensively replicated and extended and its activity has been confirmed by direct brain imaging studies. Hamerʻs speculations on the possible role of genetics in religious experience were featured in a cover story in Time magazine.

HIV/AIDS treatment and prevention
Hamer’s lab developed several biotechnological strategies to treat and reduce the transmission of HIV/AIDS. As a means to reduce the latent pools of virus responsible for viral persistence, they discovered novel chemical agent to induce integrated virus, and molecullarly engineered immunotoxins to destroy the infected cells. They also collaborated with Osel, Inc. on a novel “live microbial microbicide” approach to HIV/AIDS prevention. By genetically engineering normal vaginal bacteria to produce a potent anti-HIV peptide, significant protection against viral infection was provided in a durable and obtainable fashion for up to one month. The methodology was shown to be applicable to both rectal and vaginal use and is in the initial stages of preclinical testing. [1]

The God Gene: How Faith Is Hardwired into Our Genes

The overwhelming majority of Americans believe in God; this conviction has existed since the beginning of recorded time and is shared by billions around the world. In The God Gene, Dr. Dean Hamer reveals that this inclination towards religious faith is in good measure due to our genes and may even offer an evolutionary advantage by helping us get through difficulties, reducing stress, preventing disease, and extending life. Popular science at its best, The God Gene is an in-depth, fully accessible inquiry into cutting-edge research that can change the way we see ourselves and the world around us. Written with balance, integrity, and admirable scientific objectivity, this is a book for readers of science and religion alike.