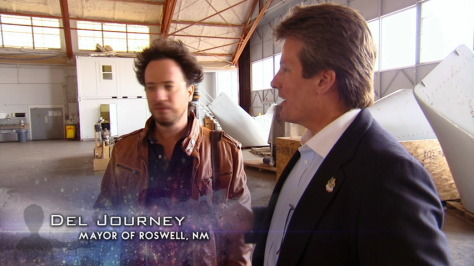 Former Roswell Mayor Del Jurney has formed an exploratory committee with the aim of running for mayor in the March 2018 municipal elections.

“My intent is to run,” Jurney told the Daily Record Friday. “Before I publicly announce, I want to spend some time with an exploratory committee and just look at what the issues are and if my management style, my leadership style is such that it would be a good fit.”

If he takes the plunge, Jurney said he will likely announce his candidacy for mayor in late summer or early fall. It would be his fourth mayoral campaign after two unsuccessful mayoral runs and one successful mayoral bid.

Jurney served as mayor from March 2010 to March 2014, when he was defeated for re-election to a second four-year term by current Mayor Dennis Kintigh.

“We accomplished a lot during my administration,” Jurney said. “I was blessed with a strong council and we did a lot of good things for the community. The truth be known, I wasn’t ready to pass the torch in 2014.”

Jurney said he feels he has unfinished business at City Hall. He said he had difficulty framing his message in the 2014 mayoral contest with Kintigh, which he lost to by a 69-31 percentage. Kintigh has not yet publicly indicated whether he will run for re-election.

Jurney said during his four years as mayor, he saved both the International Law Enforcement Academy and New Mexico Youth ChalleNGe programs from leaving Roswell.

“Both were very likely to be relocated to a different area,” he said.

Jurney pointed to other accomplishments during his term as mayor, such as designing and building the veterans cemetery at South Park Cemetery, building a girls softball complex, extending West College Boulevard from North Sycamore Avenue to the Roswell Relief Route, redesigning the Spring River corridor near the Roswell Museum and Art Center, and designing and funding a parking lot at DeBremond Stadium.

“We didn’t message that information very well,” Jurney said of his 2014 mayoral campaign. “What I hope to accomplish as this process continues is to make sure that that’s better communicated.”

He ran for mayor in 2006, but was defeated by former Mayor Sam LaGrone. In 2010, Jurney beat LaGrone in a rematch for mayor.

Jurney, 59, is currently the executive director of Family Resource and Referral of Roswell, a nonprofit agency of about 60 employees with a $2 million annual budget where he has worked for 13 years.

Jurney said, if elected, he would retain his position at Family Resource and Referral, which provides child care services, nutrition, referral, and training to child care providers.

“I think my vision for the city is one I had previously, and that is to continue to work on economic development,” he said. “Our economy, I don’t think, is at capacity. There’s a lot of opportunity still waiting to be tapped into.”

Jurney said further development of the Roswell International Air Center would be a primary focus of his administration.

“We created hundreds of jobs in working with AerSale and Stewart Industries and Dean Baldwin and Mistic and some of the others,” he said. “That’s the natural fit for Roswell, the air center. It’s a facility that attracts a lot of attention and it’s one that the city has a greater amount of ability to work with a business that wants to relocate and helping them to accomplish that.”

Jurney said the modification of the Stewart Industries hangar, state economic development funding for interior walls at the Dean Baldwin hangar and the initiative to establish non-stop commercial air service between Roswell and Phoenix all occurred on his watch as mayor.

“We were instrumental in the runway resurfacing,” he said. “When they started, they were going to cut the length of the runway down to 10,000 feet or less, and they were going to bring the width in. We lobbied them here, we lobbied them in Dallas and we lobbied them in Washington, D.C. to make sure that we did not lose the length and the width of the runway. Because of the things that we were currently doing and the things that we had in the pipeline, it showed utilization, so they agreed that they would continue with that.”

On the flip-side, the closing of the Levi Strauss & Co. plant in Roswell in 1997 and the loss of its 567 jobs, the bankruptcy of Millennium Transit Services in 2008 and the closing of the Impact Confections plant in 2011 were lost opportunities, Jurney said.

“We’ve got the potential, we just need proven leadership to continue to move it forward.”
A registered Republican since he was 18 and resident of Roswell for 54 years, Jurney said the officer shortage at the Roswell Police Department is an area of real concern.

“One of the things that I’m most pleased with during my administration is, at one point, if my recollection is right, we were about 23 or 24 officers down,” he said. “We worked with the chief very closely. We worked with the staff very supportively, and when I left office, we had six cadets at the academy. Once they finished and came back to Roswell, we would have been fully staffed and had more officers on the street than Roswell’s had in the past.

“We worked well with the Police Department in negotiating those types of incentives that are sought after, longevity and some of the educational components that we put in. I thought we had a great relationship. They worked hard and they deserve the support of the community.”

Jurney said his crime-fighting strategy is premised on supporting the chief of police, his staff, and officers.

“It would not be my responsibility or my duty to try and run the Police Department,” he said. “I trust in the people that we hire and that we put in those positions. I want them to know that the confidence is there for them to do what needs to be done. However, the attitude and the overall mood within the department has a lot to do with the administration and with the elected officials. I think that if you just show officers that you support what they’re doing — I never tried to question the things that they were doing — people start to feel a little better about who they are and what they’re doing and the effort that they’re making. They feel appreciated and you start to create that loyalty between City Hall and the Police Department, and I think that goes a long ways.”

Jurney said he is opposed to the unionization of the Roswell Fire Department. Firefighters will vote Monday whether to form the Roswell Professional Fire Fighters Association, which would represent firefighters at the rank of lieutenant and below, to include firefighters, recruits and others.

“I would rather see them not, because when it comes time to really discuss what’s important, when we’re looking at the budget, when we’re looking at what their next year compensation and benefits will be, you have to turn it over to a negotiator, and you lose that contact,” Jurney said. “You lose that ability to really sit down and understand, in a one-on-one or small group setting, what it is that they’re looking for. Sometimes the translation from the negotiators is lost and we just don’t get it right.”

Jurney said he supports ongoing projects to enlarge the Roswell Convention & Civic Center and to build a $20 million recreation center and aquatic facility at Cielo Grande Recreation Area. However, he said he would have preferred a voters referendum to decide if to increase property taxes to fund the rec center and aquatic facility, rather than the sales tax increases approved by the City Council in February.

“Our legislators always support those allocation requests that deal with kids and the quality of life,” he said. “Had we started with the roof and the HVAC, then we could have gotten to the environmental removal of asbestos and/or lead-based paint. We could have put in the elevator and taken those necessary steps.”

Jurney also said he supports examining the revitalization of the Cahoon Park Pool.
“We also did an extensive renovation to Cahoon Park Pool that, at the time, we were led to believe gave ample life to that facility, as well,” he said. “Suddenly, it was a risk to the life and the safety to children. There were gaping sinkholes underneath it and cracks on the flooring. I’m not sure that when it’s all said and done, that it will prove out that that was the actual condition of the pool.

“If part of the plan for the Cielo Grande right now is a rec center, an indoor pool and an outdoor pool, I think you can look at the cost of utilizing Cahoon Park Pool as an outdoor facility and put the indoor facility within the recreation portion. There’s probably some advantage to having recreational opportunities in multiple locations, so that might be something that the city would want to do.

“But, however, it depends on how far along in the process and what the commitments are as to how much rethinking can be done. I’m open to looking at information that has not been presented previously, and making a determination as to whether or not the direction that has been established is still the right one.”

“I think the city doesn’t always do things the best,” he said. “A couple of different companies have really worked hard to put together good, efficient, clean sanitation collection. It would begin to reduce the payroll and the liability that goes along with a job like that. Plus, those vehicles are not inexpensive by any stretch.” [1]