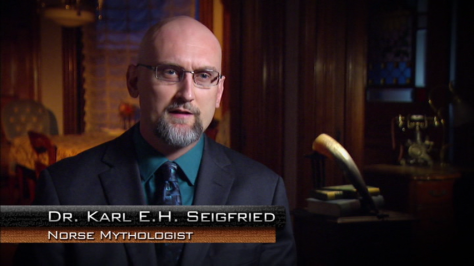 Dr. Karl E. H. Seigfried is a writer on mythology and religion. A Norse mythologist and musician in Chicago, he is Theology and Religious History Faculty at Cherry Hill Seminary and Adjunct Professor, Pagan Chaplain, and Pagan Forum Faculty Advisor at Illinois Institute of Technology. He serves as goði (priest) of Thor’s Oak Kindred, an inclusive organization dedicated to the practice of the Ásatrú religion in Chicago.

He has taught Norse mythology at Loyola University Chicago and Norse religion at Carthage College, where he was founder and faculty advisor of the Tolkien Society. He has also taught courses on mythology, religion, J.R.R. Tolkien, and Richard Wagner for the Newberry Library Seminars Program.

Karl’s website, The Norse Mythology Blog, was named the world’s Best Religion Weblog in 2012, 2013, and 2014. It is the first religion blog to enter the Weblog Awards Hall of Fame. In addition to original articles and interviews on myth and religion, the site features projects such as the Worldwide Heathen Census 2013, a first attempt to estimate current numbers of adherents of the modern iterations of Norse religion.

Karl is a featured columnist for The Wild Hunt, the primary international source for news and commentary relating to minority religions. Mollie Hemingway, Senior Editor at The Federalist, has called The Wild Hunt “a must-read for those interested in news and events dealing with the modern Pagan and Heathen communities – and religion coverage in general.”

Karl’s writing on mythology and religion has been broadcast on the BBC as part of a series featuring “leading writers on arts, history, philosophy, science, religion and beyond.” His work has been published in Herdfeuer (Germany), Iceland Magazine, Interfaith Ramadan (Italy), MythNow (Joseph Campbell Foundation), On Religion (UK), Religion and Ethics (Australia) and Reykjavík Grapevine (Iceland).

Karl was editor for The Illustrated Hávamál: Sayings of the High One and The Illustrated Völuspá: The Prophecy of the Seeress, dual-language (Old Norse and Modern English) editions of the medieval poems with new illustrations by artist Sam Flegal. He wrote all definitions relating to Ásatrú (Norse religion) in the Religion Newswriters Association’s Religion Stylebook, and he was co-author of the Heathen Resource Guide for Chaplains written for the U.S. Department of Defense.

“Denouncing Discrimination, Enforcing Inequality,” Karl’s essay on lack of diversity in religious, medieval, and Scandinavian studies, is the first piece by a practitioner of Ásatrú to be published in Sightings of the Martin Marty Center for the Advanced Study of Religion at the University of Chicago Divinity School.

“Beowulf: History, Legend, and Mythology,” Karl’s Digital Collection for the Classroom at the Newberry Library, provides teachers and students with essays, discussion questions, and archival materials as it examines various elements woven through the Old English text.

“One Crime over the Line: Śiśupāla in the Mahābhārata,” Karl’s article examining events at the royal consecration of Yudhiṣṭhira in light of other happenings in the Mahābhārata, later Indian texts, historical practice, and religious concepts, was published in volume 65 of the Journal of the Oriental Institute, the peer-reviewed academic publication of MSU of Baroda (India), the institution that issued critical editions of Vālmīki’s Rāmāyaṇa and the Viṣṇu Purāṇa. Karl’s article on “Magic and Power in The Laws of Manu, the Arthaśāstra, and the Kāmasūtra” appears in volume 66 of the same journal.

“Ásatrú and Hindu: From Prophecy to Dialogue,” Karl’s article on parallels between the Old Norse Völuspá and Sanskrit Mahābhārata, was published in Learning from Other Religions: Leaving Room for Holy Envy (Pathways for Ecumenical and Interreligious Dialogue Series, Palgrave Macmillan). Forthcoming publications include “Children of Heimdall: Ásatrú Ideas of Ancestry” in Revisionism and Diversification in New Religious Movements, Vol. 2 (Ashgate Inform Series on Minority Religions and Spiritual Movements, Routledge).

A member of the American Academy of Religion, Religion Newswriters Association, Society for the Advancement of Scandinavian Study, and Viking Society for Northern Research (UK), Karl is also the Official Norse Mythologist of the Stephanie Miller Show.

After receiving an academic scholarship in 2014 and earning an MA in 2017, Karl is now the first practitioner of Ásatrú to hold a graduate degree from the University of Chicago Divinity School. He also holds degrees in literature and music from University of California at San Diego, University of Wisconsin at Madison, and University of Texas at Austin. He studied literature and art history at Loyola University Chicago Rome Center in Italy and has taken Icelandic language courses through University of Iceland’s distance learning program. [1]