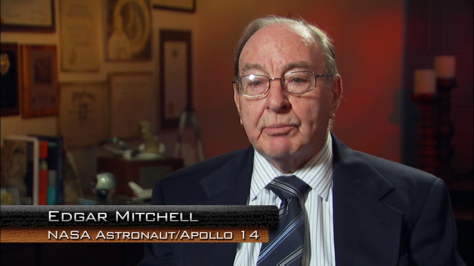 “Suddenly, from behind the rim of the Moon, in long, slow-motion moments of immense majesty, there emerges a sparkling blue and white jewel, a light, delicate sky-blue sphere laced with slowly swirling veils of white, rising gradually like a small pearl in a thick sea of black mystery. It takes more than a moment to fully realize this is Earth . . . home.”

“In outer space you develop an instant global consciousness, a people orientation, an intense dissatisfaction with the state of the world, and a compulsion to do something about it. From out there on the Moon, international politics look so petty. You want to grab a politician by the scruff of the neck and drag him a quarter of a million miles out and say, ‘Look at that, you [censored].'”

Edgar “Ed” Mitchell was the Lunar Module pilot for Apollo 14, the third lunar landing mission launched January 31, 1971. During two lunar explorations, Mitchell and Spacecraft Commander Alan B. Shepard traveled more than a mile from their landing site and spent a then record 33 hours and 31 minutes on the lunar surface.

Edgar Dean Mitchell was born on September 17, 1930 in Hereford, Texas. The son of a rancher, he learned to fly airplanes at the age of thirteen. Mitchell graduated from Artesia High School in Artesia, New Mexico and received a Bachelor of Science degree in Industrial Management from the Carnegie Institute of Technology in 1952. He earned a Bachelor of Science degree in Aeronautical Engineering from the U. S. Naval Postgraduate School in 1961, and a Doctorate of Science degree in Aeronautics and Astronautics from the Massachusetts Institute of Technology (MIT) in 1964. He graduated first in his class from the Air Force Aerospace Research Pilot School at Edwards Air Force Base, California in 1966.

Mitchell entered the Navy in 1952, and after completing basic training attended Officer Candidate School, winning a commission as an ensign. He then attended flight training at Hutchinson, Kansas. In 1954, he was assigned to Patrol Squadron 29 in Okinawa.

From 1957 to 1958, “Ed” Mitchell flew the Douglas A3 Skywarrior while assigned to Heavy Attack Squadron 2 deployed aboard the USS Bon Homme Richard and USS Ticonderoga. In 1959, he served as a Research Project Pilot with Air Development Squadron 5. From 1960 to 1964, Mitchell attended MIT then was Chief of the Project Management Division of the Navy’s field office for the Manned Orbiting Laboratory. He was an Instructor at the Aerospace Research Pilot when selected as an astronaut in 1966. Captain Mitchell logged 5,000 hours of flight time, including 2,000 hours in jets.

During their two lunar explorations on February 5 and 6, Mitchell and Shepard collected 94 pounds of lunar samples. After a then record 33 hours and 31 minutes on the lunar surface, they rendezvoused with Roosa who had been in lunar orbit aboard the Command Module Kitty Hawk, and returned to Earth with a safe splashdown on February 9. Mitchell logged a total of 216 hours and 42 minutes in space during Apollo 14. In 1972, Mitchell was backup Lunar Module pilot for Apollo 16.

Captain Ed Mitchell resigned from NASA and from the Navy in October 1972. He founded the Institute of Neotic Sciences in Palo Alto, California, and was its Chairman. The institute studied psychic phenomena in all its manifestations, trying to test them in scientific situations. Mitchell had long been interested in the subject and conducted unauthorized extrasensory perception (ESP) experiments while on the Moon. Captain Mitchell passed away on February 4, 2016 in West Palm Beach, Florida.

Astronaut Edgar Mitchell, lunar module pilot on Apollo 14, passed away Thursday in West Palm Beach, Fla., on the eve of the 45th anniversary of his lunar landing.

Mitchell joined Apollo 14 commander Alan Shepard, Jr., the first American in space, in the lunar module Antares, which touched down Feb. 5, 1971, in the Fra Mauro highlands. Shepard and Mitchell were assigned to traverse the lunar surface to deploy scientific instruments and perform a communications test on the surface, as well as photograph the lunar surface and any deep space phenomena. It was Mitchell’s only spaceflight.

Mitchell and Shepard set mission records for the time of the longest distance traversed on the lunar surface; the largest payload returned from lunar surface; and the longest lunar stay time (33 hours). They were also the first to transmit color TV from the lunar surface. Mitchell helped collect 94 pounds of lunar rock and soil samples that were distributed across 187 scientific teams in the United States and 14 other countries for analysis.

“On behalf of the entire NASA family, I would like to express my condolences to the family and friends of NASA astronaut Edgar Mitchell,” NASA Administrator Charles Bolden said in a statement. “As a member of the Apollo 14 crew, Edgar is one of only 12 men to walk on the moon and he helped to change how we view our place in the universe. “

Mitchell was drawn to the spaceflight by President Kennedy’s call to send astronauts to the moon. “After Kennedy announced the moon program, that’s what I wanted, because it was the bear going over the mountain to see what he could see, and what could you learn, and I’ve been devoted to that, to exploration, education, and discovery since my earliest years, and that’s what kept me going,” Mitchell said in 1997 interview for NASA’s oral history program.

“To me, that (spaceflight) was the culmination of my being, and what can I learn from this? What is it we are learning? That’s important, because I think what we’re trying to do is discover ourselves and our place in the cosmos, and we don’t know. We’re still looking for that.”

In his book “The Way of the Explorer”, Mitchell wrote, “There was a sense that our presence as space travelers, and the existence of the universe itself, was not accidental but that there was an intelligent process at work.”

Mitchell retired from NASA and the U.S. Navy and founded the Institute of Noetic Sciences in 1973, organized to sponsor research in the nature of consciousness. In 1984, he co-founded the Association of Space Explorers, and international organization for all who “share experience of space travel.” The mission of this organization is to provide a new understanding of the human condition resulting from the epoch of space exploration.

Edgar D. Mitchell was born Sept. 17, 1930 in Hereford, Texas, and considered Artesia, N.M., his hometown. He graduated with a B.S. in Industrial Management from Carnegie Mellon in 1952, a B.S. in Aeronautics from the U.S. Naval Postgraduate School in 1961 and a Doctorate in Aeronautics and Astronautics from the Massachusetts Institute of Technology in 1964.  NASA selected Mitchell as an astronaut in 1966. He served on the support crew for Apollo 9 and as backup lunar module pilot for Apollo 10. He worked in the lunar module simulator at the Johnson Space Center during Apollo 13, developing procedures that would bring the crew of that crippled spacecraft home.

Mitchell has resided in Palm Beach County, Florida, since 1975. He is survived by his four daughters, Karlyn Mitchell, Elizabeth Kendall, Kimberly Mitchell, Mary Beth Johnson; and a son, Paul Mitchell; and nine grandchildren. His son Adam Mitchell died in 2010. [2]