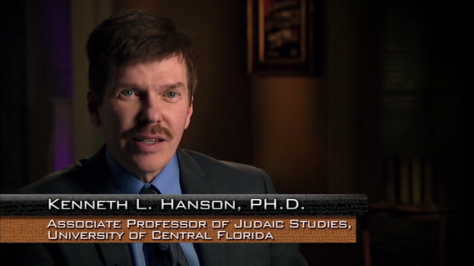 A scholar of Hebrew language and literature, the history of biblical lands, and Jewish and early Christian culture, Ken Hanson, Ph.D., teaches Judaic Studies at the University of Central Florida in Orlando. Passionate about his research of the ancient world, Dr. Hanson first found his calling while he was a young undergraduate student.  Acquiescing to his intellectual curiosity about western culture, he decided to travel back to “the root of it all,” the Cradle of Civilization, the ancient Near East.

Having never before been out of the continental United States, he boarded a plane for the Middle East and found himself living and studying on Jerusalem’s Mt. Zion. Becoming fluent in Hebrew, he then earned a Master’s Degree in international/inter-cultural communication and television, and subsequently worked for a television news gathering operation in southern Lebanon. He lived in a politically volatile region of northern Galilee (an area subject to rocket attacks), and daily commuted over a hostile border where, in addition to his broadcasting duties, he served as company liaison with the Israeli Defense Force.

Having encountered terrorism face-to-face in his work as a broadcaster, Ken gained valuable insight into today’s Middle East conflict.  Turning his talents to other endeavors, he went on to teach Hebrew to international groups of volunteer workers at Kibbutz Ga’aton in western Galilee.

What began for Ken as a few months of language study also led to a trip to Jerusalem’s Israel Museum, to a special annex built to house the Dead Sea Scrolls. Realizing that his study of Hebrew enabled him to read the ancient texts, he was amazed to realize how little the Hebrew language has changed in two millennia. Having acquired the key to unlocking the Dead Sea Scrolls, he resolved to pursue his doctoral studies in that field.

A natural storyteller, Dr. Hanson has, through his books, media appearances, and many articles, made a rich treasure of ancient texts accessible to everyone. Believing that such documents comprise a metaphysical library that we can use to better understand one another, Dr. Hanson carries his ecumenical message beyond the scholarly boundaries in which they were once held captive. His appearances on syndicated radio and national television (History Channel/ Travel Channel), have brought ancient insight into everyone’s world.

In 1997 Dr. Hanson was honored with a fully-funded scholarship by the Holocaust Memorial Center of Maitland, Florida to study at the International School for Holocaust Studies at Yad Vashem in Jerusalem. A recipient of wide accolade from the print media and in great demand as a popular lecturer, Ken is a frequent guest on radio and TV talk shows in various parts of the country. [1]