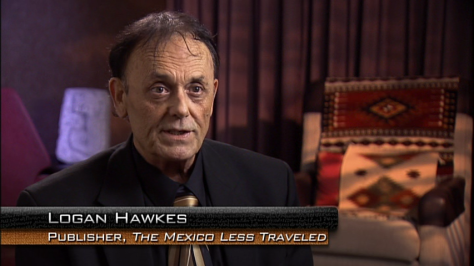 Logan Hawkes is a dual resident of Northern New Mexico and coastal Texas, who in addition to a long writing career, has served the broadcast and newspaper industries across the Southwest. He won the 1981 Hearst Newspaper Feature Writer’s Award and spent his early writing career as a successful ghost writer and author’s agent. His passion has long been the research and study of ancient American culture and history and has been active in archeological field school development at Central American sites. His knowledge and passion for ancient myth, legend and cosmology landed him on numerous radio shows and History Channel programs. His paternal grandmother was a full blood Cherokee who he says inspired him to embrace Native American oral traditions and storytelling. An experienced travel writer he along with his wife and partner Carla and young son Kyle live on a reservation north of Santa Fe in an adobe ranch home that sits on sacred Pueblo lands adjacent to a forgotten historic Anasazi ruin site. Dividing their time between the mountains and the sea, the Hawkes family operates a small media company providing content development and web site services when not spending their hours behind a keyboard. [1]

Close Encounters of the Old West

Long before the X-Files, nearly 70 years before the Roswell incident, President James Garfield, mortally wounded by an assassin’s bullet, summoned young Jonah “Tenkiller” Montana, an educated Cherokee half breed, to his seaside retreat to launch an investigation into unexplained and troublesome mysteries plaguing the post Civil War nation. Mysterious “airships” were being sighted, tales of alien encounters were hampering the spread of civilization westward, and fantastic Native American tales about shape shifters and creatures of lore and legend were causing concern for government leaders who feared America’s Indian tribes harbored dark secrets and knowledge of alien races that threatened the Republic.

Underlying their concerns were rumors of a secret organization under the direction of an alien race with plans for a one world government and total domination of the human race. Montana is charged by the President with initiating a campaign to uncover the truth behind America’s most puzzling and threatening mysteries and to report directly to the nation’s chief executive.

Join Jonah Montana on his journey across America’s colorful Old West as he investigates the nation’s most complex mysteries, alien encounters, dark conspiracies and strange tales of aliens, flying airships, monsters, ghosts and the unexplained. Close Encounters of the Old West is based on documented incidents of the 1800s and dramatized to provide readers a roller coaster ride of suspense and action with colorful characters and abundant historical reference, complete with a comprehensive appendix outlining actual historical accounts of alien sightings and encounters and Native American myths and legends. It’s an action-filled adventure tale of cowboys, aliens and Indians in a battle to determine the future security of planet earth.

Ancient Aliens of the Americas

Long before Christopher Columbus set foot in the Americas, long before the Vikings discovered the New World, the indigenous cultures of the Americas developed complex systems of government and constructed magnificent cities with towering pryamids and temples and were proficient in art, science and astronomy. They also were keepers of long forgotten knowledge and harbored secrets of complex math, science and astronomy unknown to European explorers. Discover the thriving and forgotten people of Ancient America and explore their belief systems, the symbology they used to to illustrate their complex and comprehensive understanding of their origin, and examine many of the artifacts they left behind, clues perhaps to help us better understand who they were, where they came from and why they believed they were connected to the stars. Could Ancient Americans have been the first to populate the earth? How do we explain their complex language, their mysterious forms of art, their proficiency at math and their knowledge of time, and how could they chart the stars and planets with such perfection without the use of modern and high-tech equipment? Venture into the world of Ancient America and uncover secrets, explore the possibilities, and dare to open your mind to the lost knowledge of these highly advanced cultures and why they abandoned it all.