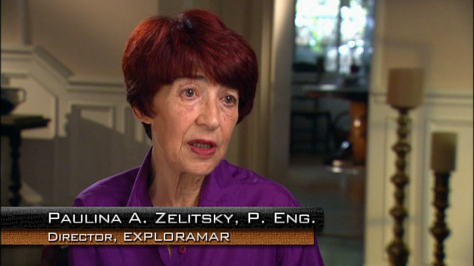 Paulina is a Canadian Professional Engineer with extensive international experience in security, transportation and energy sectors. She obtained her initial M. Eng. degree in Coastal Marine Engineering from National Marine University in Odessa, Ukraine; and in 1976 she graduated in Permafrost Engineering at the University of Alberta in Edmonton, Alberta, Canada.

Paulina started her career as a port designer for Soviet, Cuban and later in the 70s for private Canadian engineering companies across Canada. After Paulina’s naturalization and certification as a Canadian Professional Engineer, she jump started her new career in Arctic Engineering in the energy sector, initially with the Northern Canada Power Commission in Edmonton and later with Petro-Canada as a Systems Engineer and with Ports Canada as a Program Manager. From 1984 Paulina served as a Safety and Risk Analysis Engineer at EMR COGLA in Ottawa and the National Energy Board (NEB), where she participated in the development of Canadian Onshore Pipeline Regulations and Canadian Diving Regulations. [1]

Odessaphile: Jews in Odessa: a Story of Cultural Cross-Pollination

Odessa, the largest port on the Black Sea in Ukraine, became a unique cosmopolitan city in an ocean of traditionally isolated Russia. Why did all the residents of many ethnicities in Odessa, even those who were non-Jews, speak in the strong slang of Yiddish/Ukrainian/Russian mix sparkled with Italian, French, and English, in which all residents of Odessa insisted on communicating among themselves? Why do visitors of Odessa feel the impression of a Middle Eastern or European Mediterranean city and definitely not a Russian city? Why is Odessa the cradle of Reform Judaism, the Resistance Movement, Zionism, Yiddish literature, Klezmer music, and so many brilliant talents in many areas of the arts, literature, and science? Why are violinists from Odessa so famous worldwide? Why is Odessan humor world famous for its sarcasm? Was it not this humor that made the Jewish writers from Odessa internationally renowned? Why are Odessans so firm in their determination not to submit to Russian imperialism? What does Odessan Jewish culture have to do with it? Why is it a birthplace of Jewish resistance fighters: the National Committee of Jewish Self-Defence that were the groups formed of young secondary school students who singlehandedly protected the city residents from pogroms during periods of rebellion and revolution. This spirit of student resistance gave rise to the Bundists and the Social Democrats. Why only in Odessa were these new Maccabees protecting the Jewish population from pogroms while the Jews in the rest of the Pale of Settlement were decimated? Only in Odessa will you find the answers.

The Sea is Only Knee Deep – Volume 1

For the first time, Castro’s Cuba is described from the perspective of a young Soviet female engineer working there in the late 60s. The timeliness of Paulina’s revelations is underscored by the recent revival of Russian military ambitions globally and in Cuba. This is an authentic first-hand story of a young female Soviet defector who made a choice to risk her life rather than to become a KGB informant and honey trap in Havana during the publicly unknown second Cuban missile crisis beginning in 1969. The authors draw back the Cuban/Soviet curtain on an undisclosed Soviet navy nuclear confrontation with the United States. The Sea is Only Knee Deep presents an intimate and bittersweet portrait of the coming of age of a fiercely independent Jewish girl, raised by her father, a former sea captain, in the Black Sea city of Odessa during and after Stalin’s last decade of Soviet power. Interwoven with her childhood narrative of a streetwise kid, deftly dodging the suffocating strictures of Communist tyranny, is a Cold War thriller arising from Paulina’s personal involvement with a top-secret Soviet submarine base in Cuba. The base was home to a fleet of Soviet nuclear subs armed with ballistic and cruise missiles with nuclear warheads aimed at America. Concealed from the Western public and hidden beneath the ocean, this Soviet submarine base served as a major nuclear arms missile platform in the backyard of the United States where it operated secretly and in defiance of international treaties for over 20 years. Domestic political considerations during the Vietnam War kept the US Government silent. Paulina’s memoir is sprinkled with stories from the lives of her family’s five generations of Odessan Jews and the revelations of the Soviet (now Russian) cynical political manipulations in Cuba.

The Sea is Only Knee Deep – Volume 2

A literate and beautifully written account of a Jewish girl growing up in Stalin’s Russia and Castro’s Cuba. Her creative approach to the problems of survival and achievement under rigid dictatorships is an example of women’s determination and achievement. Paulina’s personal crisis came after a violent rape attempt by her Soviet supervisor at work. This moment became a powerful motivator to overcome obstacles and demonstrated the power and potential of the human spirit. Finding herself embroiled in a Cold War drama on the Island of Cuba where Soviet and American military forces are vying for supremacy during a secret nuclear confrontation, Paulina decided on a dangerous escape to freedom with her two small children rather than become an obedient slave and an informant for a cruel and rogue tyrannical state. When in 1970 the KGB attempted to conscript Paulina as an informant, she defected with her two young children to Canada in a bizarre feat of courage and audacity. This episode is sure to elevate your heart rate. Who said that women are the weaker sex? She enacted the assertion of “I am mad as hell, and I am not going to take it anymore” and despite the long odds, succeeded. She became the only defector from a communist country that made such an escape with small children in Gander, Newfoundland, Canada. A seemingly discouraging and difficult situation for a young, penniless immigrant with two small children did not prevent Paulina from rapidly adjusting to a new country. She re-established herself professionally and even brought her parents to Canada 4 years later. Paulina’s family proudly integrated into Canadian society. Her boys graduated from Canadian universities as scientists. They became confident, responsible, and independent individuals in the entrepreneurial hi-tech sector. Paulina’s memoir provides a highly motivational reading for young girls who are considering a professional career. It is remarkable how this first-hand story of a young female Soviet defector is relevant to the current global situation regarding the Russian Navy, which replaced the Soviet Navy with the obsessive aim of nuclear dominance in the Atlantic ocean, as well as in the Arctic.