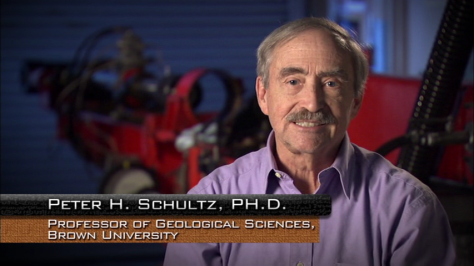 Impact cratering is one of the few processes affecting all planetary bodies. Records can provide clues for contrasting geologic evolutions. The planetary record, lab experiments, field studies, and theoretical approaches allow exploring a process at scales we hope we never witness. My main research has been on the effect of impact angle on cratering and the role of the atmosphere in modifying the process. Different planetary environments, laboratory simulations, and theoretical models allow testing under extreme conditions and to extreme scales.

Peter H. Schultz received his Ph.D. in Astronomy at the University of Texas at Austin in 1972. After working as a research associate at the NASA Ames Research Center, and a Staff Scientist at The Lunar and Planetary Institute, he became an Associate Professor in the Department of Geological Sciences at Brown University in 1984. He was promoted to full Professor in 1994. In addition to his research and teaching responsibilities at Brown, Pete has served as Director of the Lunar and Planetary Institute Planetary Image Facility, and is currently the Director for both the Northeast Planetary Data Center and the NASA/Rhode Island University Space Grant Consortium. [1]