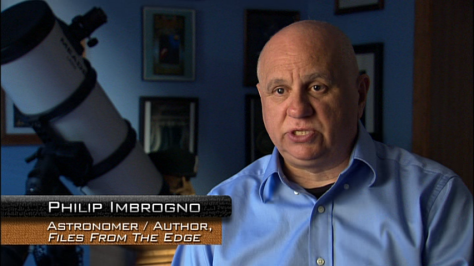 Philip Imbrogno has been investigating and researching paranormal phenomenon for over thirty years. He has been a science educator for the past twenty five years and has authored countless magazine articles on science and the paranormal and has appeared or done research for a number of major television presentations on UFOs, astronomy and the paranormal. [1]

Files from the Edge: A Paranormal Investigator’s Explorations into High Strangeness

For more than thirty years, paranormal expert and scientist Philip Imbrogno has investigated―or been witness to―amazing phenomena that push the limits of reality. In Files From the Edge, Imbrogno presents the most shocking cases of his career, complete with eyewitness reports and never-before-released photographs.

This scientific investigation into the bizarre paranormal realm of high strangeness features never-before-published, meticulously documented research on the weirdest of the weird―abductions, encounters, and sightings of Bigfoot, sea serpents, and the blood-sucking Chupacabra. Imbrogno examines reports of poltergeists, alien creatures, humanoids, spook lights, ghost voices, earth spirits, and djinn. Using the latest quantum theory, he offers a scientific analysis of how these phantoms of time and space might materialize in our three-dimensional world. Many of the topics covered in this book have been virtually unpublished―until now.

The Vengeful Djinn: Unveiling the Hidden Agenda of Genies

If you fear one thing in life, fear the djinn. This groundbreaking book presents the findings of Rosemary Ellen Guiley and Philip J. Imbrogno’s investigation into the powerful and mysterious interdimensional beings known as djinn or genies. It reveals what the djinn are, where they can be found–and their hidden agenda against the human race.

Working with material compiled from a variety of sources–including their own case files, Middle Eastern lore, the Qur’an, teachings of Islamic scholars, and the latest theories in quantum physics–the authors explore the relationship between the djinn, demons, fairies, shadow people, and extraterrestrials. They discuss the military’s interest in these clandestine beings, offer eyewitness accounts of modern human encounters with the djinn, and reveal the location of interdimensional entry points in North America.

Are you ready to solve a mystery? One that disproves accepted archeology and history? Then you need to get Celtic Mysteries in New England by Philip Imbrogno and Marianne Horrigan.

You see, there are over sixty-five mysterious small buildings throughout New England. Archeologists dismiss them as root cellars from colonial times. But if they are just root cellars, why are there no records of them being made by the colonists? Why is it that in one record a colonist ― who found one already made and on his property ― was told by a priest to avoid it? Why is it that many are aligned to certain stars that are associated with the ancient Druids? Why do some have intricate carvings on the walls?

In order to answer these and many more questions, the authors start on a journey of discovery, and take you along on a wild ride that threatens to shake the very foundations of history! You will go along with them as they discover factual evidence of European explorers visiting the Americas nearly 1,000 years before Columbus. You will learn how the Druids came over and built these constructions as part of their religion.

In Europe, such constructions are known to appear along lines of energy and power. So are these. You will discover how they are frequently the center for the appearance of odd lights and UFOs. Scientific evidence shows them to be centered on weird, magnetic field anomalies.

If you are ready to discover the Celtic past of the Americas, you need to get this book. It will also intrigue and thrill archeologists, paranormalists, and people who just want to know the truth.

Over the course of his thirty years of investigation into UFOs, including his own field research, photographic evidence, and meticulously compiled case studies, Philip Imbrogno has provided fascinating new insight into paranormal phenomena. In this book, he reveals for the first time the detailed findings of prominent paranormal experts as well as his own firsthand experiences.

Using the latest quantum theories, Imbrogno sheds new light on classic UFO cases, government cover-ups, and the hidden connections between UFOs and other unexplained phenomena-from crop circles and animal mutilations to angels and jinn (or genies).

Ultraterrestrial Contact investigates the most extreme and bizarre UFO reports―the cases that most UFO investigators are afraid to tackle―and presents a radical new quantum approach to understanding the contact phenomenon.

When Philip Imbrogno collaborated with famed UFO researcher Dr. J. Allen Hynek on Night Siege, Dr. Hynek requested that the more sensational cases of “high strangeness”―claims of contact with not only alien intelligence, but also demons, djinn, and otherdimensional beings―remain unpublished. Hynek thought the reports would detract from the credibility of the entire extraterrestrial investigation field. This book reveals, for the first time, the details of these controversial reports and presents Imbrogno’s startling scientific conclusions from his thirty years of research into the alien contact phenomenon.

The Strange, the Bizarre, and the Unexplained

Just when you think Philip Imbrogno’s infamous files have been exhausted, he presents us with another collection of spooky cases of unexplained strangeness. Pulled from more than thirty years’ worth of investigations, these never-before-published cases involve run-ins with angry spirits, phantasms, monsters, and poltergeists.

Through detailed on-scene investigations and historical research, Haunted Files from the Edge takes you on a creepy tour of notorious specters, haunted places, and legends such as the Ghosts of Sleepy Hollow, the Curse of the Green Witch, the Ghosts of the Alamo, and the Curse of Owlsbury.

Using state-of-the-art tools and special imaging techniques, Imbrogno has been able to find rational explanations for 73 percent of the cases he has investigated. The mystifying cases presented here, supported by eyewitness testimony and photographic evidence, are among those that defy explanation.

An investigation into claims of alien contact and abductions

Multidimensional Portals: An Investigation into the Origin of Paranormal Phenomena

Sightings of UFOs, Bigfoot, ghosts, and other creatures we thought existed only in mythology and campfire stories are increasing. Why? And where do these entities and astral beings go when they are not being seen? Paranormal experts Philip J. Imbrogno and Rosemary Ellen Guiley have spent years investigating geographical locations that are hotbeds of paranormal phenomena. Their shocking conclusions about what they’ve found―portals or doorways to other realms―are presented here.