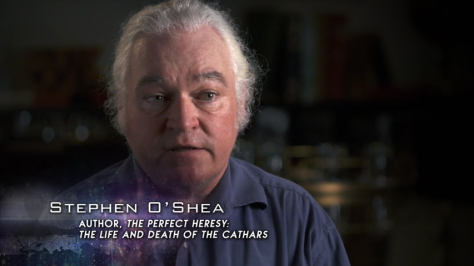 Stephen O’Shea
(Author, The Perfect Heresy:
The Life & Death of the Cathars)

The Alps: A Human History from Hannibal to Heidi and Beyond. 2017, in the US by W.W. Norton and Company.

The Friar of Carcassonne: Revolt Against the Inquisition in the Last Days of the Cathars. 2011.

The Perfect Heresy: The Revolutionary Life and Death of the Medieval Cathars. 2000. Published simultaneously in the US (Bloomsbury USA) and Canada (Douglas & McIntyre), then in the UK (Profile). Various translations for international editions in the following years.

Back to the Front: An Accidental Historian Walks the Trenches of World War One. 1996, in Canada (Douglas & McIntyre). 1997, in US (Bloomsbury USA) and UK (Robson).

Miscellany: The Penguin Traveler’s Guide to France. 1990. History/culture chapters on Paris and Provence and the Riviera. Chapter on Paris bars. The series was later bought by Berlitz.

1995–97: Attended Cannes Film Festival for Variety and a press syndicate that included Le Monde and El País. Wrote first blog (before the word was invented) for the syndicate at the 1996 and 1997 Festivals.

1997– present: Freelance in Perpignan, then Providence. Articles on politics and subjects related to my books, as well as features and profiles. Many book reviews. Canada: The Globe and Mail, Maisonneuve. UK: The Times, The Guardian, Daily Telegraph, London Review of Books, Above, BBC History. US: Washington Post Magazine, Washington Post Book World, Los Angeles Times, Travel and Leisure.

Dozens of radio and tv appearances in the US, UK, Canada, and Ireland, in conjunction with my books. (Best story: Seconds before going on-air for an Irish breakfast telly show, the host, who had not read or even looked at the cover of The Perfect Heresy, leaned over to me and said, “My first question will be about the Cathars and what tribe they were related to. Comanche? Or Apache?” Panicked, I told him in a whisper just to say my name and ask me what the book was about.)

More noteworthy appearances, which may be available on-line:

BBC Radio 3. “Swimming Toward the Sun: A Look at Le Corbusier and the Cathars.” Host: Jonathan Glancey. 2002.

BBC Radio 4. Focus on Faith: “Reforming Islam?” A debate between myself and Tariq Ramadan. 2006.

Most translating work has been done in film (scripts and subtitles). English to French, for French TV, with Paul Memmi in Paris; and, much more frequently, French to English, with Alexander Whitelaw in Paris (1985–89, 1993–97). Whitelaw and I subtitled scores of French movies for directors Eric Rohmer, Agnès Varda, Patrice Leconte, Bertrand Blier, Jean-Pierre Mocky and many others. The most difficult part was convincing these directors that their English was not as good as they thought it was, so stop with the lame suggestions, already. Most difficult subtitling job: Mathieu Kassovitz’s La Haine (1995). Most delicate subtitling job: Marcel Ophuls’ Hôtel Terminus (1989).

The Perfect Heresy: The Life and Death of the Cathars

Eight hundred years ago, the Cathars, a group of heretical Christians from all walks of society, high and low, flourished in what is now the Languedoc in Southern France. Their subversive beliefs brought down on them the wrath of Popes and monarchs and provoked a brutal ‘Crusade’ against them. The final defeat of the Cathars was horrific with mass burnings of men, women and children in the village of Montaillou in the Pyrenees.