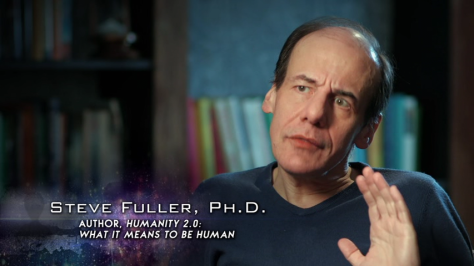 Steve Fuller (born 1959, New York City) graduated from Columbia University in History & Sociology before gaining an M.Phil. from Cambridge and PhD from Pittsburgh, both in History and Philosophy of Science. He currently holds the Auguste Comte Chair in Social Epistemology in the Department of Sociology.

He is most closely associated with the research program of social epistemology. Originally trained in the history and philosophy of science (Ph.D., 1985, University of Pittsburgh), he is the founder of the research program of social epistemology. It is the name of a quarterly journal he founded with Taylor & Francis in 1987, as well as the first of his more than twenty books. His most recent work has been concerned with the future of humanity, or ‘Humanity 2.0’.

He has spoken in over 30 countries, often keynoting professional academic conferences, and has been a Fellow of the Royal Society of Arts since 1995. He was awarded a D.Litt. by Warwick in 2007 for significant career-long contributions to scholarship. He was appointed to the Auguste Comte Chair in Socal Epistemology in 2011, and is a Fellow of the UK Academy of Social Sciences and the European Academy of Sciences and Arts. He is also a Senior Research Fellow at the Breakthrough Institute, the leading ‘ecomodernist’ think-tank and an Affiliate Scholar at the Institute for Ethics and Emerging Technologies, the leading ‘transhumanist’ think-tank. His writings have been translated into more than twenty languages.

Since 2013, he has been a member of Edge, the ‘third culture’ at the edge of knowledge, contributing to its annual questions. [1]

Humanity 2.0: What it Means to be Human Past, Present and Future

Social thinkers in all fields are faced with one unavoidable question: what does it mean to be ‘human’ in the 21st century? As definitions between what is ‘animal’ and what is ‘human’ break down, and as emerging technologies such as artificial intelligence and nano- and bio- technologies develop, accepted notions of humanity are rapidly evolving.

Humanity 2.0 is an ambitious and groundbreaking book, offering a sweeping overview of key historical, philosophical and theological moments that have shaped our understandings of humanity.  Tackling head on the twin taboos that have always hovered over the scientific study of humanity – race and religion – Steve Fuller argues thar far from disappearing, they are being reinvented.

Fuller argues that these new developments will force us to decide which features of our current way of life – not least our bodies – are truly needed to remain human, and concludes with a consideration of these changes for ethical and social values more broadly.