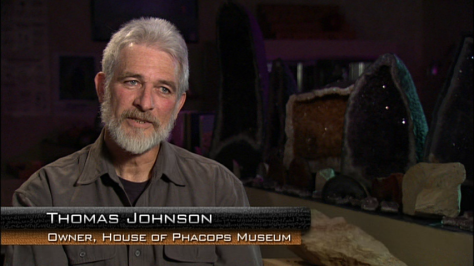 The House of Phacops is a rock shop and trilobite gallery located on the southeastern edge of the Serpent Mound impact crater approximately three and a half miles from Serpent Mound.

Since 1978 this small business has supplied fossil and mineral specimens worldwide. The shop features fossils, minerals, custom handmade jewelry, art, carvings, music and herbs. The centerpiece of the shop is a Trilobite Gallery created by the U.S. National Museum of Natural History at the Smithsonian Institution.

Tom Johnson, owner of The House of Phacops, began researching the Isotelus Trilobite, Official State Fossil of Ohio, in 1985. The largest known example of the State fossil is on exhibit at his shop. Built on the foundation of a tannery that operated in Locust Grove around 1850, the building is clad with Ordovician flat rock quarried in Adams County. The Ordovician seabed, dating back 438 million years, attracted Johnson to Adams County because the ancient seabed contains the finest known examples of the Isotelus Trilobite.

The House of Phacops has become a focal point Serpent Mound Spring Seed and Water Peace Summits. Johnson’s wife Terri Sings With Ravens Rivera is a song writer of Native American Music, offering CD’s for sale and hosting readings and healings on the weekends. Their Facebook group Serpent Mound Alternate Universe Rock shop showcases Native American history and culture along with geology and paleontology, and sponsors events at Serpent Mound.

Tours of the Serpent Mound Impact Crater are offered for a small fee. Free carving classes are offered 4 times a year, and seasonal workshops on Geology and Paleontology are offered for Universities throughout the region. [1]