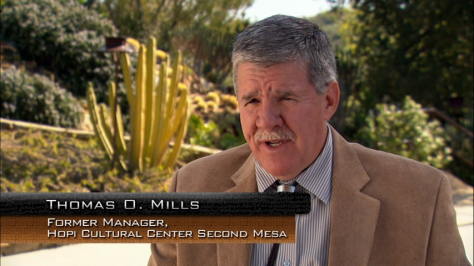 Thomas O. Mills had the opportunity to manage the Hopi Cultural Center at Second Mesa, Arizona for four years when it first opened in the early 70’s.

He has a deep respect for the Hopi People and believes their Creation Story can be proven.

In his first book, The Book of Truth, A New Perspective On The Hopi Creation Story , he traces the Hopi story back to Egypt and puts new light on the murals, temples, and pyramids from that point of view, a view that rings true today.  If correct, his theory pinpoints the location of many new underground chambers and the tomb of Spider-women, the Hall of Records.

In his second book, Stonehenge, If This Was East , Mills uses his knowledge of the Hopi Ceremonial Cycles to find ancient east at a number of unexplained ancient sites around the world.  He then uses this knowledge to find north and compares north to Charles Hapgood’s four North Pole locations in the past 100,000 years with amazing results—thus dating the sites and proving the Hopi Creation Story.

Tom now lives in North Carolina with his wife after retiring from the railroad.  He has two children and two grandchildren in the area.  He has many Hopi friends and visits them as often as he can. [1]

Thomas O. Mills befriended author Frank Waters, who in 1963 had written The Book of the Hopi with his Hopi informant Oswald White Bear Fredericks. Their book included the Hopi Creation Story. Mills listened, read and began to draw his own original and provocative conclusions. In his book, he seeks to track actual events and history that may be buried within it and how this could relate to our future. This book, drawing together a variety of ideas that are usually considered separately, makes stimulating reading and is good material for classroom discussions on history, race, Hopi culture, astronomy and “myth.” Mills’s intuitive vision should spur scientists to look more closely into what we like to call “myths” or “stories” for their possible basis in historical fact. And today, as we worry about climate change and what it means for the future, shouldn’t we also be figuring out whether modern technology can prevent the earth’s next rotational shake-up, and how we plan to survive it?

Stonehenge – If This Was East

Has East always been East? If it was not, would ancient civilizations have left us clues where it was located in the past? Mills uses his knowledge of the Hopi Creation Story to explain Stonehenge, the Pyramids, the Mayan Temples, and many other unexplained ancient sites located around the planet to prove his point and establish the timeline of their construction. North, South, East, and West have not always been located where they are today. There was an important reason why they have changed, what happened in the past, and what our ancestors wanted us to know about Earths delicate balance in space and our future at the present time.