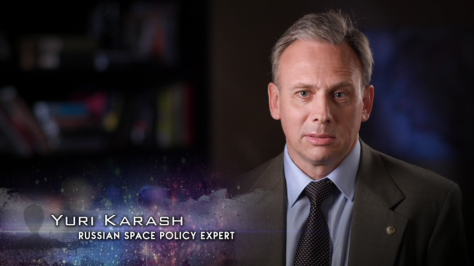 In 1990, Karash was one of the finalists in the Soviet Journalist-in-Space project and a candidate for space flight. In 1992, while already having a Russian Candidate of Sciences degree, he graduated from the Paul H. Nitze School of Advanced International Studies (SAIS) at Johns Hopkins University in Washington, D.C. with Masters of International Public Policy degree. The same year he was accepted for Ph.D. training at the School of International Service in the American University in Washington, D.C. During his studies at SIS he also took classes at the Space Policy Institute at George Washington University. He got his Ph.D. in International Relations with concentration in Space Policy issues in 1997. His dissertation was published by the American Institute of Aeronautics and Astronautics under the title: The Superpower Odyssey. A Russian Perspective on Space Cooperation. In 2000, Karash became a corresponding member of the Tsiolkovskiy Russian Academy of Cosmonautics.

In 1985-1989, Yuri Karash was an aerobatic pilot at the Chkalov Central Flight Club in Moscow. In 1994-1995, he took flight training at the Bay Bridge Aviation flight school in Maryland and became the first Russian citizen to be rated by the U.S. Federal Aviation Administration as a Commercial Pilot with Single Engine, Multiengine and Instrument Flight Rules ratings. In 2010, Karash got a Certificate of Course Completion after successfully completing the “Flight Crew Transition Course Up To and Including Simulator” on Airbus A320 at the Airbus Training and Flight Operations Center in Toulouse, France.

Since 2000, Karash has been intensively involved in the development of the Russian space policy through his numerous articles and presentations in the Russian mass media. He proposed a concept of the hybrid ‘fly by – orbital’ manned/automatic mission to Mars (Mars Piloted Orbial Station – MARPOST) as the most realizable in the current Russian economic conditions.