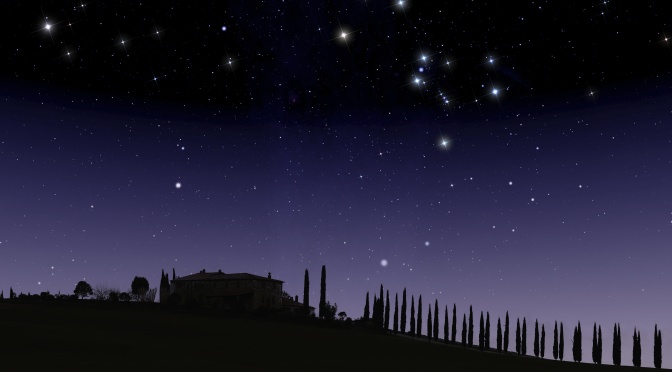 “For my part I know nothing with any certainty, but the sight of the stars makes me dream.” – Vincent van Gogh

The Ancient Alien Theory travels the Universe across an expanse of tens of thousands of years to the present day as we investigate the possibilities and probabilities of life beyond Earth. We look at the unexplainable – enormous man-made caves, structures, crop circles containing encrypted messages, and complex mathematical and astronomical equations, perplexing our leading scientists. Experts have found thousands of strange drawings of beings with blue skin, multi-limbed humanoids, and more. Could many of these beings depicted throughout the world and across time actually reflect extraterrestrial visitors? Since the launch of NASA’s Kepler Space Telescope in 2009, scientists have identified thousands of planets capable of life. Is it possible that this discovery finally answers the age-old question: “Are we alone in the Universe?”[1]

Enormous manmade caves…unexplainable structures…and underwater discoveries that challenge everything we know about the past…is it possible that an advanced civilization inhabited Earth thousands of years ago? And, if so, were they human, or something out of this world? Modern archaeologists are continuously unearthing artifacts and sites that defy the conventional timeline of human history. Throughout the world we find megalithic stone monuments that are attributed to mysterious ancestors, strange humanoid figures that date to pre-historic times, and evidence of ancient underground shelters hewn out of solid rock. Could it be that a sophisticated culture existed here on Earth – thousands and even tens of thousands of years earlier than we believe? Could the stories of a time when gods and otherworldly beings inhabited the planet be more than just mythology?[2]

When German aerospace engineer Wernher von Braun joined the U.S. military and space programs after WWII, he quickly became one of the foremost scientists credited with developing the ballistic missile, the first American satellite and the enormous Saturn V rocket that enabled man to reach the moon. Von Braun’s bold predictions that we would explore Mars and build a space station have become reality. But how is it that Von Braun – whose contemporaries included such scientific geniuses as Nikola Tesla, Robert Oppenheimer, and Albert Einstein – was so far ahead of everyone when it came to rocketry? Did he have secret information collected by the Nazi party during WWII – or access to advanced technology recovered from the alleged UFO crash in Roswell, New Mexico, in 1947? Or is it possible that the greatest rocket scientist the world has ever known found his inspiration not on our world, but another?[3]

Incredible strength…superior intelligence…and even the ability to reproduce. In the 21st-century, robots are being programmed to do everything from performing surgery on humans – to exploring other planets. And humanoid robots are rapidly reaching a level of sophistication that was thought to exist only in science fiction. But what are the implications of creating robots that are increasingly intelligent and independent? Is the obsession with creating counterfeit humans really pointing the way to mankind’s future…or to its past? Greek stories dating to 2,000 BC tell of the god Hephaestus creating robots to build weapons, as a well as the bronze giant Talos. In Egypt, the pyramid texts say that the god Osiris was dismembered, then reassembled and brought back to life just like a machine. If sophisticated robots really did exist in the ancient world – what function did they serve? Who built them? And what happened to them?[4]

Good and Evil. Light and Dark. God and Satan. In nearly every culture there are stories of opposing forces at work here on Earth – forces of a supernatural nature. Could these forces really exist? And, if so, what is the true nature of the dark forces? Throughout history, there have been individuals accused of being in league with agents of darkness. The infamous mad monk Rasputin believed he served as a conduit for an otherworldly realm, the Nazi SS were said to have tapped into dark powers through ancient symbols, and famed occultist Aleister Crowley claimed to have summoned a non-human entity through the use of dark magic. Is it possible the entities these men claimed to be in touch with were, in fact, extraterrestrials? And might humans serve as the pawns in a cosmic battle between the forces of Light and Dark?[5]

Ancient Astronaut Theorists have suggested that many of the divine beings depicted in cultures throughout the world are not really divine – or mythological – but instead reflect extraterrestrial visitations that our ancestors did not understand. If true, what can account for all the different types of beings that are depicted, from anthropomorphic birds and reptiles, to gods with blue skin to multi-limbed humanoids? Might there have been numerous alien species inhabiting Earth? Could the accounts given by modern day alien abductees be evidence that these otherworldly entities continue to visit Earth to this day? And is it possible that they all have a common ancestor? In 1928, archaeologist Julio Tello discovered the Paracas Skulls of Peru – elongated heads with cranial volumes at least 25% larger than the largest known human skulls. Some believe that these remains are of extraterrestrial origin.[6]

Billions of dollars have been spent in our quest to find an “Other Earth.” Since the launch of the Kepler telescope in 2009, scientists have identified thousands of planets capable of supporting life. Is it possible that this discovery finally answers the age-old question: “Are we alone in the Universe?” Could it be that just as we seek out other habitable planets, advanced extraterrestrials from distant galaxies did the same with Earth in the remote past? Throughout world mythologies, there are tales of beings from the stars coming down to Earth. The Dogon Tribe in Africa believes their gods came from the Sirius Star System. The Maya associated their gods with the Pleiades Star Cluster. And according to the Hopi tradition, life itself was seeded by celestial beings. Ancient Astronaut Theorists propose that not only has our planet been visited by extraterrestrials, but that they are responsible for our very existence.[7]

In August of 2014, Russian cosmonauts aboard the international space station discovered something incredibly unexpected covering parts of the windows – living sea plankton. If sea life can thrive in space, might the reverse be true as well? Might there be alien life forms that inhabit our seas? Throughout history, there have been tales of strange creatures hidden in Earth’s waters. While many discount stories of sea monsters as purely mythological, it is estimated that Earth’s oceans are home to between 700,000 to one million species – and shockingly, two-thirds of those species still remain unknown. Considering the recent discovery that some sea life can survive in outerspace, is it possible that tales of giant creatures like the Kraken and the Loch Ness monster are evidence of extraterrestrial entities taking refuge beneath the seas?[8]

Over 10,000 crop circles have been reported worldwide, appearing in 50 different countries, and nearly every continent on Earth. These strange designs pressed into crop fields range from simple circles to elaborate pictograms thousands of feet long. The phenomenon has been associated with scientific anomalies, strange lights, and even UFO activity. But critics say that they are all part of an elaborate hoax. But are they? Crop circles have been making modern headlines since the 1960s, but their history can be traced back hundreds – if not thousands of years. The designs themselves often contain encrypted messages and complex mathematical, geometric, and astronomical equations that perplex our top mathematicians and scientists. Ancient Astronaut Theorist, Giorgio Tsoukalos travels to England to meet with researchers and scientists to investigate the phenomenon – both on the ground and in the lab – to find out what we haven’t been told.[9]

On March 19th, 2002, Gary McKinnon was arrested for hacking into 97 pentagon and NASA computers over a 13-month period, in what authorities call the “biggest military computer hack of all time.” McKinnon claimed that he found evidence of a secret American space fleet, by way of a list of dozens of “non-terrestrial officers” and their assigned spacecraft, replete with USSS (United States Space Ship) monikers. Might the United States military really have a secret space program? And, if so, are we preparing for a space-based war with other nations…or other species? Ancient Astronaut Theorists suggest that there are numerous factions of alien races with competing agendas visiting Earth, and that there is evidence they have been in conflict with each other for thousands of years. According to these theorists, there is evidence that these wars actually took place here on Earth in the distant past – not between gods, but between extraterrestrial visitors.[10]

Due to warfare, instability, and inaccessibility – there are specific regions of the world that are off-limits to exploration. These forbidden sites are often ground zero for chaos and the destruction of ancient artifacts and irreplaceable records detailing mankind’s origin and history. In Iraq and Syria, thousands of ancient artifacts and relics have been deliberately destroyed. Museums and excavation sites across Egypt have been looted multiple times. In the highlands of Tibet and the jungles of Central America, sacred texts have been systematically destroyed. Could this all be by design? Ancient Astronaut Theorists propose that there may be profound historical objects and information buried at these sites – ancient knowledge, technology, or perhaps the truth about our alien past. Is there a plot to conceal information? And could extraterrestrials be intervening in the cover-up?[11]