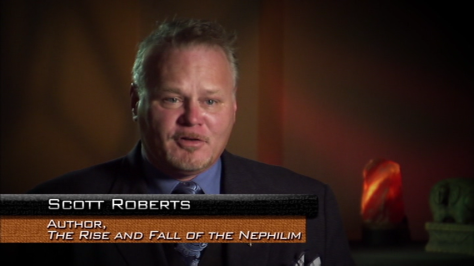 Scott Roberts
(Author, The Rise and Fall of the Nephilim)

I am a designer, Illustrator and writer of fiction & non-fiction, occupationally hovering in the advertising ghettos of Minneapolis & Saint Paul, Minnesota. But that is merely the “normal” side of me. I have had an illustrious career that sometimes seems and feels more the stuffs of fictional characters than the down-to-earth roles I play in my day-to-day existence. I have been places and seen things that most people only experience vicariously through books, movies and other sources of the wild imaginative. Yet, I have been there, in those exotic, alluring, haunted places, experiencing what some might only find in the realm of their daydreams… or nightmares.

Being an academician, I maintain my pragmatic persona and a healthy skepticism. But I must admit that I have been touched by the mysterious and the metaphysical. In my adventures, I have found that Horror meets History, and the diaphanous world of “gods, demigods and spirits of the dead” – as 4th century BCE Egyptian historian Manetho said it best – is very real, ebbing and flowing, in and out of the land of the corporeal.

I can be more or less defined by my roles as Husband to my wife Raini Roberts, and Dad to my six exuberant children, two of whom – my twin daughters, Abby Roberts and Bryn Roberts – are out on their own as highly successful entrepreneurs (FinFolk Productions), and four of whom are still young enough to live at home – Sam, Flynn, Rhowan Claire and Ellery.

But I can also be defined by my passions – the things that drive me: history, exploration, adventure. All of these ingredients combined, make my life a paradoxical roller coaster of hellacious joy and insightful befuddlement, and were it not for my buoyant, easy going nature, and my rollicking, stable, common sense and damn-the-cannonballs-and-full-speed-ahead bravado, I would most assuredly have lost my sanity a long time ago.

I value a good pipe, a stout pint, and consider myself a purist when it comes to single malt highland Scotch – which for me is not a tool of inebriation, but rather an enlightened repast to be shared with colleagues and like-minded pedagogues of philosophy and hob-knobbing banter.

I am a contemplative, spiritual, gregarious man of consideration who values intelligence, wit, and justice. While I am wholly affable, I do not shy away from a good fight, and have had a few brawls in my day – whether on my behalf or in defense of another – and, were times different, would most probably be known wide and abroad as an expert swordsman. However, in keeping with my paradoxical nature, I prefer employing words over weapons, wit above profanity, spirituality above religion, stalwartness above inconstancy. And as I grow older, my burgeoning jaded cynicism is wholly tempered by my desire to not become an ass. My humor is wry, my mind is fertile, and my love is deep.

I am the founder and Publisher of INTREPID Magazine, a publication with an eclectic focus on Science, Politics, Culture, Ancient Civilizations, Conspiracies, Ufology, Archaeology and Unexplained Phenomena. From 2009 to late 2010, I was the Editor-In-Chief of TAPS ParaMagazine, the official publication of SyFy’s Ghost Hunters.

I am co-author and business partner with my dear friend, John Ward, who is a British archaeologist living and working south of Luxor, Egypt at Gebel el Silsila, where his wife, Dr. Maria Nilsson, is Director of the Swedish archaeological mission. We wrote The Exodus Reality in 2013, and have several works and projects in progress. We own and operate the Paradigm Symposium, Intrepid Magazine, Intrepid Radio – and are co-founders of IPBN Alternative Talk Radio and The Situation Room with Rocci Stucci, Exodus Reality Adventures, and are currently embroiled in History Trippers.

My family and I live in rural Wisconsin, just across the border from the outskirts of the Twin Cities, MN. [1]

The Rise and Fall of the Nephilim: The Untold Story of Fallen Angels, Giants on the Earth, and Their Extraterrestrial Origins

The ancient books of Genesis and Enoch tell us that sprit beings known as the Watchers descended to the Earth, had sex with women, and begat a hybrid race of offspring known as the Nephilim.

Such tales are as old as humanity itself. These histories and accounts of visitations and subsequent mixed-blood, alien-human races comprise the bulk of the world’s myths, legends, religions, and superstitions.

The Rise and Fall of the Nephilim examines:
Elohim and the Bene Ha Elohim–God and the Sons of God

Biblical and apocryphal sources from Enoch to Moses

The role of the Fae, Elves, Elementals, and ancient gods

What if the old spiritualities and religions weren’t just legends?

What if there was something living and breathing beneath the surface, a tangible interlinking of religious thought and spirituality, science and myth, inter-dimensionality and cold, hard fact?

The Nephilim walked among us… and still do today.